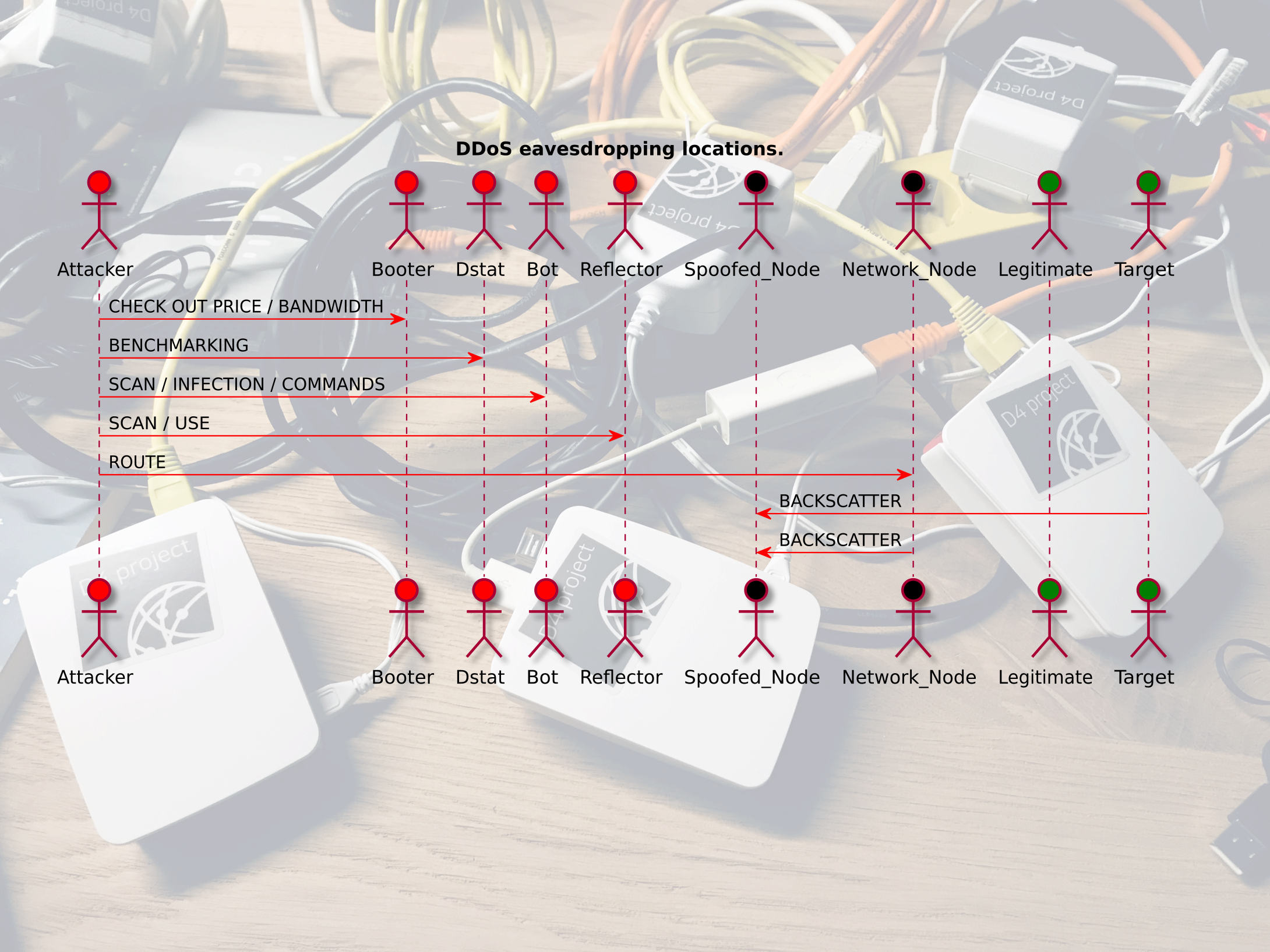 Denial of Service attacks are attacks where an attacker prevents a service to answer to its legitimate users by causing resources exhaustion on the infrastructure furnishing the service. This can for instance be done by flooding a server with requests: the server cannot keep up with the rate of request and legitimate users are denied to access the service. It can be figured naively as an arm wrestling situation where the side with the larger bandwidth wins.

But DoS activities can not be reduced to this naive one to one approach: attackers seek to be efficient and achieve their goal while using the minimum amount of resources possible. Therefore DoS operations become distributed (D-DoS) and by combining others techniques like amplification, even manage to become sustainable businesses kq418.

This article is part of set in which we discuss the state of the art of DDoS. In this article, we introduce remote Denial of Service attacks’ techniques as well as basics characteristics, regardless of the network protocols involved. We discuss how an attacker set up an attack, the side effect of each step, and where D4 could be used to detect DDoS-related activities without sitting on the targeted infrastructure.

This series of article is in a rolling release state and constitutes a knowledge base where we plan to discuss several topics around DDoS detection, the literature around these, and what could be implemented in D4. Some parts will back up the inception of D4 analyzers, others will explain why we prefer not follow specific paths.

In the following section, we present concepts that are useful to discuss DDoS attacks, what are the side effects of attackers’ activities, and how one could reckon detect these.

The TCP/IP model is a layered model for computer communication. There are 4 layers, that pass data to the layer above and receive data from the layer below. Layers are organized in the following way:

The basic naive approach we use in introduction can be pictured as basic flooding: an attacker sends numerous requests to a service, while spoofing packets’ source IP to disguise its own, until the server’s resources are depleted and further requests can not be answered.

These naive DoS attacks can arise across all layers. This is the most expensive way of disrupting a service as the attacker is the origin of all the requests. Still, as client/server communications are usually asymmetric (client receive larger responses than the requests it sends), the attacker does not need the same amount of resources as the target to disrupt the service. This this kind of attack are mostly Endpoint Denial of Service techniques types.

The distribution of a DoS attack is usually done via the use of ‘Bots’: a group of machines that were infected by a malware that creates a master-slave relationship between the attacker and the machines (the botnet). After infection, the attacker can send commands to its bots to order to attack a target, as pictured below.

These attacks can appear on all layers, and impact both the target’s network or endpoint.

Getting Smarter: Amplification in DDoS

Another technique to lower even more the resources spent by the attacker to disrupt a service is amplification: the attacker sends small spoofed queries to a third-party service that triggers large responses directed at the target.

Amplification attacks arise on layers 2/3 and aims at clogging the network between the target and its clients by generating a lot of network traffic. These are Network Denial of Service attacks.

Getting Smarter: Exploiting the protocol

The last technique an attacker can rely on to disrupt a service is to exploit protocol loopholes that allow requests to trigger an expensive processing. By sending malformed packets, incomplete requests, or requests that take forever to receive, the attacker can push the target to spend more resources on a request than is usually needed.

These kind of attack focus on the application layer and are therefore Endpoint Denial of Service attacks.

Attacker’s journey and its side-effects

Instead of digging straight into the details of every kind of DDoS attacks we focus on the attackers’ behaviours prior and during the attack, and the corresponding side-effects we reckon one can observe on the network.

The first step an attacker has to go through even before attempting an attack is to create the capability to perform it. MITRE PRE-ATT&CK framework preattack describes several steps that an attacker may go through to achieve this. We could transpose DDoS capacity building in this setting as follows:

Note that PRE-ATT&CK also contain a Booter Technique (T1396) in which most of this setup phase is taken care of by a third party. If one were tasked with the duty to detect DDoS attacks, a first step could be to monitor Booter/Stresser services, or setup fake DDoS services to inquire about who is interested into this type of services.

Moving on to the staging phase, one could deploy honeypots to listen to incoming network scans from attackers. Listening passively for scanning operations may leak the attackers’ intentions early, responding positively to refection probes allows for being part of forthcoming attacks (see below).

One step further up the interaction ladder comes purposefully getting infected by the attacker’s malware if the opportunity arises. This allows to monitor even more closely the attacker as the honeypot is part of its botnet. To do so, one as to reverse engineer the attacker’s Command and Control protocol.

After the Staging phase comes Testing. DDoS attackers often use remote services (eg. https://dstat.cc/) to test their capabilities, or capabilities of services they intend to hire. One strategy could be to set up such service and advertise it online to pinpoint what DDoS infrastructures are out there, and fingerprint these.

Once the DDoS capability is available, comes the exploitation phase. Again, this phase comes with side effects that can be monitored to detect its occurrence: backscatter traffic. Backscatter traffic is the traffic that is sent back by the target or other nodes along the way between the attacker’s infrastructure and the target’s infrastructure to the spoofed IP addresses used during the attack. On the picture below, the Bot randomly picks up a source address in the range of a Blackhole network. A Blackhole is a monitoring network that has never been announced and as such, should not receive any traffic, except for Internet scans, mistaken systems and spoofed requests’ backscatter. Eventually, when the attacks succeeds the Target is not able to respond to any request but another Network Node sends a response to inform the source about the state of its request.

After having described these basics topics around DDoS, we can pinpoint in the following sequence diagram the network activities and corresponding collection locations that are good candidate for D4.

How hard would it be to be part of these conversations? That is what we will discuss in the next articles.